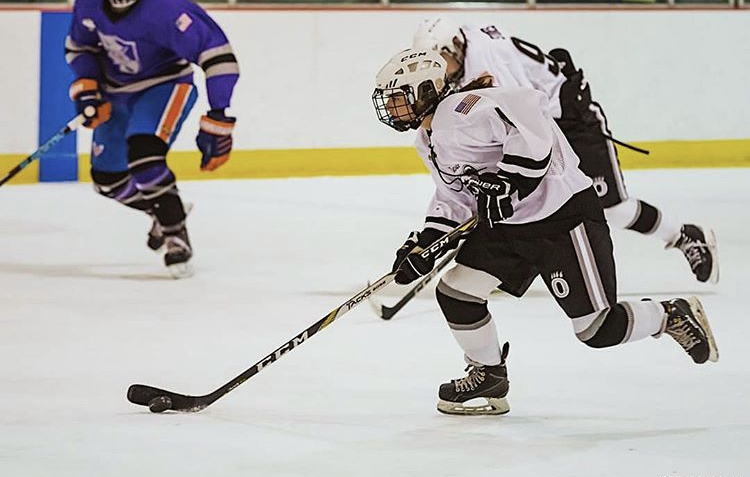 Sami Karch skates up the ice.

Ice hockey is an upcoming sport many people are starting to get into. It’s one of aggression and high intensity. It’s always been male dominated, but recently more girls have been making their way into the sport.

The Oakdale Ice Hockey team has never had too many players on it let alone girls. The first season in 2010-2011, only 14 players were on the team; barely enough to compete. The thought of fielding both JV and Varsity team was out of the question.

Now, in 2019, Oakdale High School does have enough players for a JV and Varsity team. Ana Campe, a senior at Oakdale, played her freshman year in 2016-2017 season for the school and was the only girl on the team. Within a 3 year span, one girl on the team became five.

Even though many girls have gotten into hockey, that doesn’t mean they feel like a part of the team. When asked about what they would want to change on the team, they all had the same thing to say about it; “ We don’t feel like part of the team and we barely get to talk to our teammates except for in school.” The girls don’t have much time to get to know their teammates off the ice.

There are currently 5 girls on the team, which is the most any Monocacy Valley team has ever had. Even with the growth of girls hockey, they still think there will never be an abundance of girls on the team. If more girls do join, they will most likely be forced to play girls high school hockey. There is a girls high school league, but there are currently only 4 teams across the whole state of Maryland.

On the bright side, girls ice hockey is growing and becoming easier to access. When Gold Medal Ice Hockey Olympian, Hailey Skarupa was asked what the hardest set back was in hockey, she replied, “When I was cut from the US Olympic team.” Skarupa was invited to the tryouts for the Olympics and didn’t make it the first time around. She was the very last player cut from the team.

About 8 months after the Olympic team was announced, a player on the team was injured and the director of USA Hockey called Skarupa and asked her to practice with the team. She wasn’t assured a spot on the team, they just needed another player for practice. A few months after, she was given a spot on the roster and made the team.

Many things have been done to promote girls hockey, such as Kendall Coyne, another gold medal ice hockey Olympian in the 2018 Olympic,  participating in the NHL All Star skating competition. Coyne came less than 1 second behind the fastest player in the world, Connor McDavid. This inspired many girls to give hockey a try.

More and more girls have been joining hockey at Oakdale, and many younger girls will eventually grow to be players here as well.. There is even a paid pro league for women’s hockey (NWHL) for younger players to aspire to. In recent years, there has been a lot of support for women’s hockey and a tremendous amount of respect for the more skilled athletes that prove they can keep up in the male dominated sport.