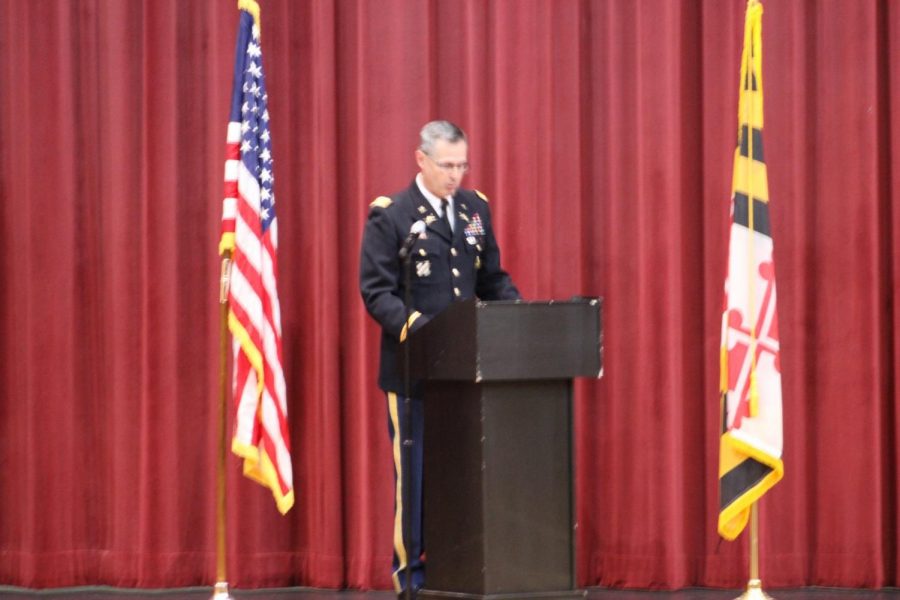 Veterans Day occurs on November 11th honoring the 11th hour on the 11th day of the 11th month of 1918, marking the end of World War I, and was originally known as Armistice Day. President Dwight D. Eisenhower officially changed the name to Veterans Day in 1954. In 1971 Veterans Day was moved to the fourth Monday in October after Congress passed a bill in 1968. In 1975, however, President Gerald R. Ford returned the holiday to November 11th due to the significance of this day.

On Thursday, November 7, Oakdale celebrated Veteran’s Day by inviting 60 veterans to speak to classes and attend a ceremony.  Since 2012, staff and students have thanked veterans for their service. This honorable event has gained more popularity each year.  The first event was organized by Class of 2013 Graduate Kevin Hine, who is now a 1st Lieutenant in the Marine Corps.

Oakdale’s Veterans Day Ceremony is now hosted by the National Honor Society Chapter led by advisor, Dr. Edward Schoder, who is one of the eight staff members at Oakdale who served in the military.  When asked why this ceremony is hosted, Dr. Schoder shared, “This is to recognize those who served our armed forces, and thank them for their service.”

Another Oakdale staff member who served is Mr. Benjamin Zamostny, the Band Director. Zamostny is a veteran of the United States Marine Corps. When asked does he feel honored on Veterans Day, Zamostny shared, “Not exactly.  The way I see it is that I’m part of the ceremony and work the gig to perform, but I’m never an observer. On the other hand, I do try my best to get through every year to feel honored”.

A few classes at Oakdale even got the opportunity to listen to guest speakers prior to Thursday’s ceremony.  Mrs. Miller’s first block class got the opportunity to hear from Robert Ulsiney. Ulsiney enlisted into the United States Navy as a college graduate, and served in Operation Desert Storm. His platoon, at the time, was brand new. Ulsiney also shared that Operation Desert Storm was a very chaotic time.

When asked if there are other ways Veterans Day can be celebrated in Frederick, Dr. Schoder replied, “I think the county should allow soldiers to attend local patriotic events for free.  It’s great how we have people here in our community who want to help defend our country”.

At the end of the day, the NHS provided them with a lunch, and members got to sit and talk to individual attendees, learning more personal information about each other.