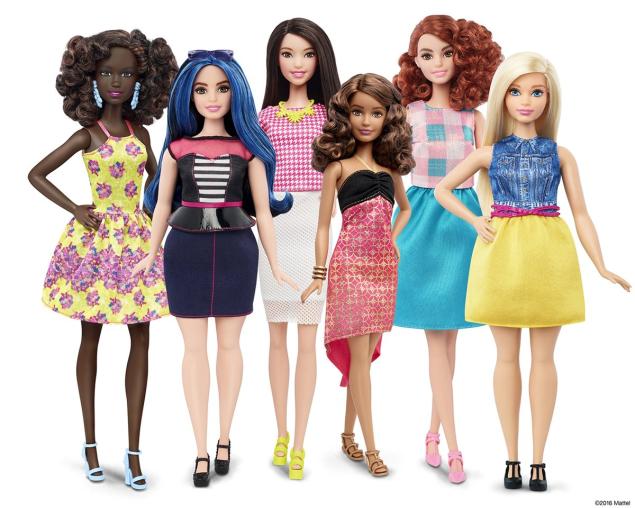 For decades, little girls across the world have spent countless hours in their rooms playing with their favorite doll, Barbie. Becoming the most successful doll in the history of toy making, Ruth Handler was the creator of the very first plastic Barbie, naming it after her daughter in 1959. From the pets, clothes, accessories, movies, to the infamous Ken doll, little did Handler know that with increasing success Barbie would become more than just a child’s toy, but an icon.

On January 28th, 2016, Mattel released a new line of Barbie dolls, this time not blonde nor with perfect body proportions. Now coming in all different shapes, races, and sizes, the Barbie brand has expanded their horizons into offering dolls that are tall, petite, and curvy with over 30 new combinations – more importantly, Barbies that represent the 21st century American. One of the dolls even has a shaved head; how rad!

The new toys allows, “The product line to be a better reflection of what girls see in the world around them,” exclaimed spokeswoman Michelle Chidoni from the Barbie brand (usatoday.com).

If that isn’t good enough, the line has received positive feedback from children, which are the most important to this experiment since they’re the target audience.

In one interview, a pair of pre-teen girls observed the tan skinned Barbie close up. “I think I can relate to them more now that they’re all not the same person.” (Glamour Magazine, Youtube.com)

In a recent tweet regarding Barbie’s new body shapes, actress Kirstie Alley claimed, “I’m glad I was raised in the 50’s when a doll was an object, not a role model, and boys could call me a cootie without going to the principal.”

Amongst the strong opinionated adults, what most people don’t realize is that this doll transformation is more than well…a transformation! In a society where thin is in, and eating disorders are more prevalent than ever, Mattel’s newest release represents much more than body positivity.

“It’s about being equal,” voiced OHS Senior Cameron Pitts. “Having such an iconic figure like Barbie show young females that being small, or being curvy is okay, is so important.”

With that said, critics claim that Barbie and other entertainment/media platforms have indirectly warped the minds of this generation.

“It’s all women see in their everyday lives,” stated Senior Alexis Lowe. “What most people don’t realize is that skinny is not always healthy, and curvy Barbie is not about being fat. It’s about having hips and a bust, something all girls should be proud of.”

In a recent article by the New York Times, it was said that Barbie’s unrealistic perfect physique was “responsible for eating disorders.”

According to research from the The National Association of Anorexia Nervosa and Associated Disorders (ANAD), the need to have a fit body haunts the minds of at least 15% of American females (www.anad.org) and that girls get these disorders from seeing the promotion of skinny bodies in their everyday lives.

Furthermore, it is said that innovators follow the consumers, and the products put on the shelves are based upon what people want to buy. As stated by the New York Times, “ [Barbie] sales have plummeted in recent years as the doll has struggled to remain relevant to little girls who do not look like her and who play with toys other than dolls.” From a marketing standpoint, this trendy toy is extremely smart and caters to what the customers want.

One idea that seems to recur with the millennial generation is the desire to be unique and the acceptance of body size, sexuality, and clothing choices. It’s a new way of thinking, and while some people stay stuck in the past, Barbie continues to uphold its name as one of the most on-trend dolls the consumer market has ever seen. A round of applause to Mattel for not only creatively finding new ways to increase their sales, but for making a statement and reminding girls (and guys) that the body you’re born with is the only one you’ll have. Love it!

For more articles related to this topic, check out :