Big Mac vs. Whopper: Which One is a Healthier Choice? 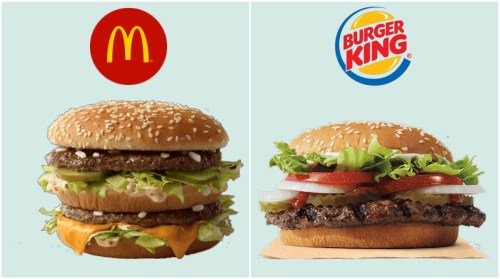 The size of the burgers implies that the Whopper is healthier

The famed Big Mac and the well-known Whopper are the most iconic menu items of their respective fast-food chains, McDonald’s and Burger King. Society agrees that they are both delicious, yet unhealthy. However, one is healthier than the other. Which one is it?

The most important information in answering this question is of course the nutritional facts of both hamburgers. The size of the Big Mac is somewhat misleading. Just because it is bigger does not mean that it is more unhealthy than a smaller burger.

First, the three most important nutritional facts, which are calories, cholesterol and carbohydrates, need to be assessed and compared. The Whopper has an astounding amount of calories at 660, while the Big Mac has 540 calories. Obviously, the Big Mac takes this category as it has 120 less calories than the Whopper.

The false notion that a smaller burger is always healthier than a bigger burger has been thus far disproved. Emmanuel Greene, a sophomore at Oakdale High School, voiced, “I think the Whopper is healthier… just because it’s smaller.” He was surprised when told that the Whopper is not so healthy. “Wow…. really?” he asked. His voice speaks for  the majority of Americans, who think that the Big Mac is less healthy. In the category of sodium, the Big Mac wins yet again with 940mg and the Whopper has 980mg.

The last three categories of nutrition are grams of sugars, fiber, and protein. In grams of sugar, the Big Mac wins again with 9g while the Whopper has 11g. Finally, in grams of fiber, McDonalds wins narrowly this time, with 3g, while Burger King comes close with 2g.