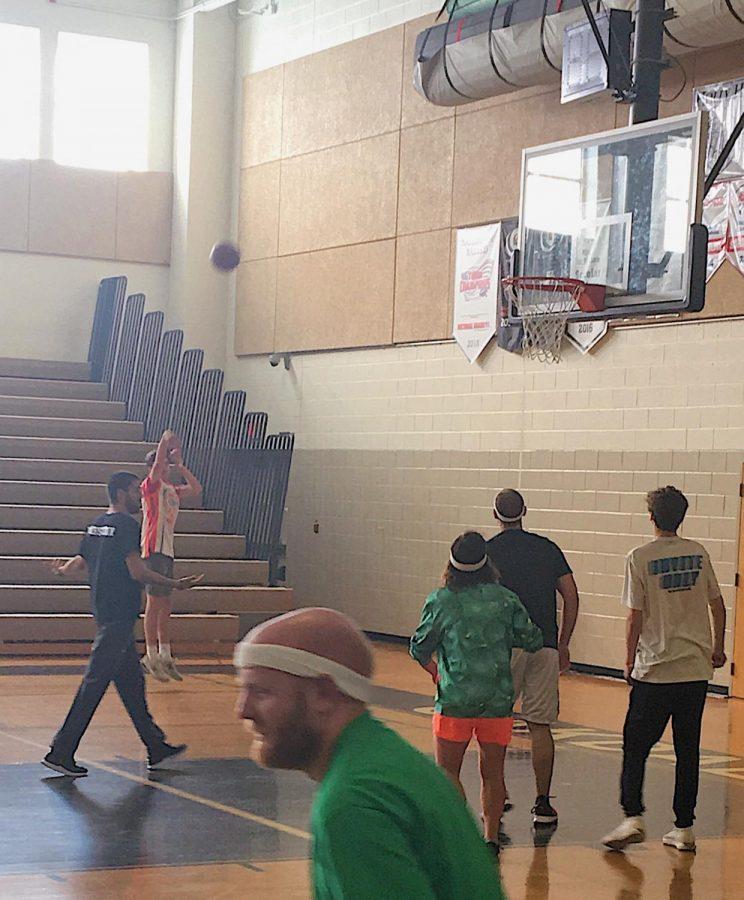 A student makes a shot during the basketball game, which raised funds for the Environmental Club’s newest project.

A student-run initiative will take the school by storm, with a goal to make Oakdale a green-accredited school through the Maryland Association for Environmental and Outdoor Education (MAEOE). The initiative is planned to last until April 2021, which will involve two school years of students.

MAEOE requires schools to choose four categories regarding environmental issues and complete two projects regarding each category. An example of this would be ‘responsible transportation & reduced emissions,’ and the project could be related to cutting down on the amount of students and staff driving to school.

Club advisor, Ms. Elizabeth Nave, mentions that the club is planning to choose solid waste management as one of their topics, and working on recycling and composting.

“The whole purpose is to make green advances throughout the school,” says Junior Kailey Bawcombe, who, along with fellow Junior Jenna Russell, is leading the venture.

An initiative to this significance calls for help from the community. A senior-teacher basketball game was put on to raise awareness of the project and help raise funds for their first project: a water station to refill water bottles. The project was requested by Principal Lisa Smith. Nave admits that she isn’t sure what is in store for the project yet, but she is certain that it will be on the second floor.

Russell says that the hardest part of the project will be “sustainability, because there are four different aspects we have to cover, and getting the funds for each aspect will be hard,” which is one of the reasons that it is important to get as many individuals working on the project as possible.

Bawcombe and Russell make a point in mentioning that their inspiration doing the project was Nave all along. Russell says, “It was her dream to make Oakdale a green school, and I think that once she introduced it to us and we saw what we were capable of and the benefits our school would have, that’s when we really got into it.”

This holds true as Nave explains, “The whole education about sustainability and sustainability practices are so kids can make a difference outside of school.”

Nave continues that her purpose for the project, “If they do it, they might encourage their families to do it. If families do it, it’s a trickle down effect.”

Nave makes a good point, because becoming a Green School isn’t just about Oakdale High School, its effect will reach the entire community, and for the better.