Get Your Head in the Game with OHS Girls Basketball 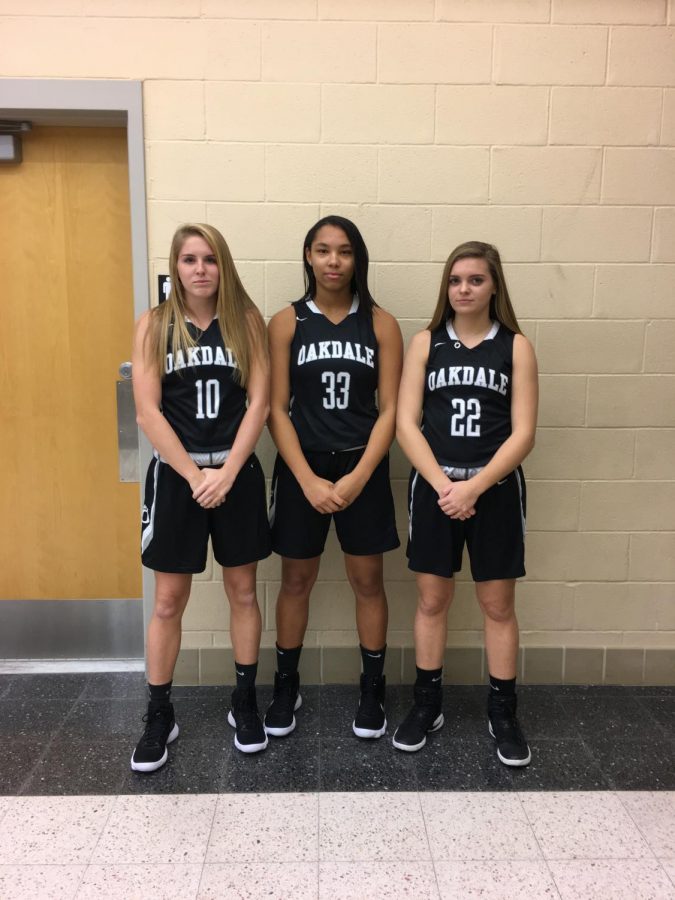 CAPTION FOR PICTURE: Sophomore Sam Foster, Junior Brianna Walker, and Senior Sarah Case pose for a picture before a practice. Be sure to come out to support the Lady Bears Basketball team this season!

Girls Basketball has always been a big contributor to the success of OHS sports. They have made multiple appearances in the State tournament, and have had players move up to play at the collegiate level. Their season began with tryouts on November 15.

Coach Rob Healy has been the OHS Girls Varsity Basketball coach since the school opened in the 2010-2011 year. Aside from his eight years at Oakdale, he has coached at Urbana and Wootton High Schools in MD, and Slippery Rock High School in PA. Overall, Healy has worked as a coach for 18 years.

“[My favorite part of coaching is] building life long relationships and watching them come together as a team, and succeed both on and off the court.  Hopefully they go on in their lives to be successful in whatever they choose to do,” explained Healy.

He stated that his goals for this upcoming season are to “play hard, play smart, play together and have fun.” Healy also mentioned that their toughest competition is “whoever is the next game on our schedule.  We are focusing one day at a time.”

Brianna Walker is a Junior at OHS and has been playing basketball since kindergarten. She has been a member of the Varsity team since her sophomore year and plays either shooting guard or power forward.

“My favorite part is playing with such amazing teammates. We all get along very well and I look forward to every practice and game because of them,” claimed Walker.

Walker explained that the biggest difficulty their team faces is learning to play with the new girls, stating that it takes some time for everyone to gel at the beginning of each season.

“Our biggest strengths as a team is that we play as a team. Nobody on the team cares who gets the credit. We are all working towards a common goal of winning. Also, we are very encouraging as teammates.”

Walker mentioned that the team’s ultimate goal is to reach the State Championship. Overall, they wish to be better this season than they were last year, meaning anything from making that extra pass or advancing further in the tournament.

Aside from Basketball, Walker is also a member of the OHS Girls Varsity Softball team. Although athletics are very important, school is her highest priority.

“Finding a balance between schoolwork and my sports schedule can be difficult at times but that’s what makes a student athlete. The student athlete makes time for their studies and their sport(s),” stated Walker.