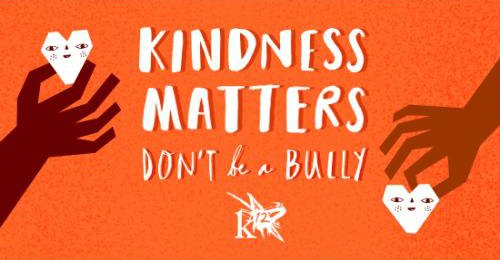 Above is a representation of the kindness this day represents.

Bullying is defined by the dictionary as abuse or mistreatment of someone vulnerable by someone stronger, more powerful. Being subjected to bullying is a confusing and utterly terrible experience that no person should go though.

But at the same time, why do bullies bully? According to Guidance Counselor Christy Polce, some people who have been picked on by others are more likely to end up becoming bullies. “Everyone has been subject to teasing, but others have dealt with bullying and those people are more likely to act out.”

Bullying, as well as teasing, have been around forever. Most people, of all ages, could more than likely recall a time where they were bullied in some way. This time, more than likely, took place in their school, whether it is on a sports team, at a school event, or even in the hallways.

A recent study done by the NBPC (National Bullying Prevention Center) showed that 1 out of 5 (20.8%) students have reported being bullied on school grounds: therefore, proving the continuing problem being faced by much of today’s youth.

Although the overall concept of bullying is terrible, there is a silver lining. There are many people involved in the support of anti-bullying and who are actively pushing for a more positive school environment. As Polce also concludes, “The biggest thing for people to do, is to look out for each other. Never be afraid of standing up for someone because it could cause the bully to stop.”

As we know, bullying is a problem sweeping the nation, and not in a good way. But what actually happens in communities and schools? Polce responded, “Bullying leads to students not attending school, or missing it to avoid being bullied.”

As stated earlier, bullying is extremely relevant in high school. Bullying is in almost every single high school, even if you might not realize it. “People do not realize when they are ‘bullying’ because some might see teasing as a case of bullying.” states Polce.

More people need to step up to fight against bullying. Bystanders are one of the most important factors in stopping bullying. “As bystanders witnessing bullying, we need to stop the conversation, and as high schoolers, tell a trusted adult.” If you see something, such as bullying, become involved and say something. It is imperative that we help with the fight against bullying.