Oakdale Welcomes the Newest Addition to the Music Department! 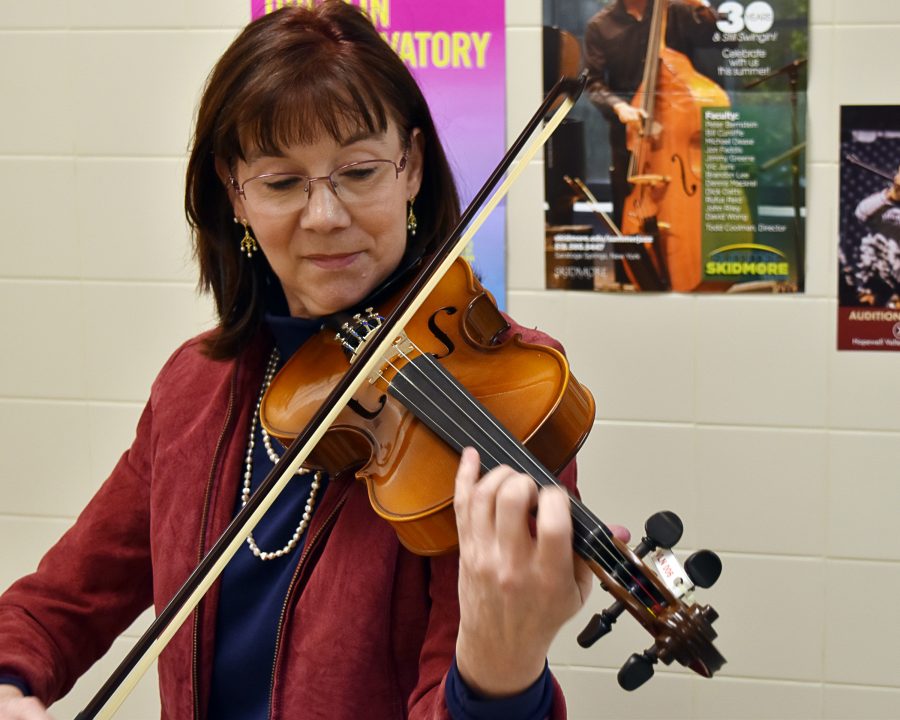 When the school year begins and students scramble to pick their new classes, many often find themselves in need of an art credit. Some of these students will turn to music courses, seeking a class with an easy curriculum. Ms. Sue Buxbaum, the newest addition to the Oakdale High School music department, states that most kids come into her class expecting to “play jams all day.” This misconception, however, is not true. Ms. Buxbaum works hard to shape each one of her student’s individual musical experience, as well as their musical knowledge.

Mrs. Buxbaum started her teaching career in Oakwood, Ohio, a small urban district where she taught for three years. She started playing violin in fourth grade, stating that it “came naturally” to her.

Although she was dedicated to music, Ms. Buxbaum did not originally intend to pursue a music career. Interestingly, she actually wanted to have a job as a forest ranger, or even a geneticist. However, her private violin instructor encouraged her to follow her passion for music during her college years. During this time she quickly realized that the joy of music was something she wanted to continue and impart to others.

Upon arriving at Oakdale, she had high expectations of the school. “I heard that (Oakdale) was a good school, up there with Urbana. I was excited to be here and knew it had a great music and arts department”.

Despite the excitement of teaching at a new school, Ms. Buxbaum still had some hesitations. As a string player, it was a challenge for her to accompany the show choir as a pianist. However, her hesitations were quickly put to rest by the confidence, and the preparedness of the group.

On top of conducting the show choir, Ms. Buxbaum also teaches various guitar and piano courses here at Oakdale. She expressed her love for teaching by mentioning her students’ personal growth throughout her class: “I love to see the light bulb go on when a student finally gets it (the subject being taught).”

Students have been equally as pleased with the class’ progression and growth. “From the beginning of the year to the end of the year you could see growth in every student whether that was small or large. Everyone improved with their musical talent”, stated freshman Emma Melton, a former student of Ms. Buxbaum’s guitar class.

Although Ms. Buxbaum has been at Oakdale for a relatively short time, she has already made a lasting impression on her students and looks forward to crafting new musicians.