Scoliosis: Bent but not Broken 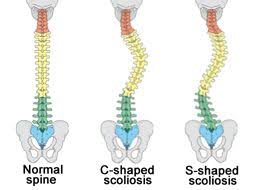 The image above shows the two types of spine shapes when you have Scoliosis and how it looks compared to a normal spine.

Scoliosis is something that over 3 million children and teens in the country struggle with.  The disorder affects the spine causing it to twist and turn.  According to Johns Hopkins, “common signs of scoliosis include a difference in shoulder height when viewed from the back, a head that is not centered with the rest of the body, or a difference in hip height or position.”

This disorder can come with some different treatments to help straighten your spine: monitoring for less severe cases, bracing for moderate cases, and surgery for the most severe cases.  Having been diagnosed this summer with Scoliosis, experiencing wearing a brace myself is difficult at times and this disorder can cause a lot of changes.  Someone  who can agree with this is a Sophomore at Oakdale who explained; “My spine curvature was 38  degrees (not it in the 20s).  I did have a back brace which was very uncomfortable to wear. It was a hard plastic encased my whole torso.”

They also explained how they felt about wearing the  brace; “It was hard being a teen with scoliosis because not many understood what you were going through.  At first I was scared to wear it to school but then I became more comfortable because I had many supportive friends.”

Though they said “not many understood” a poll taken by the Oakdale Post shows out of 18 people, 100% know of Scoliosis and 66.7% know someone with Scoliosis.  It’s good to know that people in our community are there to support their friends  and family who may have it.

The Sophomore explains now how they feel with it off  by saying, “I don’t have to wear my brace anymore. I was excited to get out of it because it would get really hot.”

Josephine Sasse, a senior at OHS, had a different case  of Scoliosis as she expresses how she felt, “When they first told me, I didn’t think much of it, but after the x rays and when I started getting back pain I became more worried about how bad my back pain will be in the future.”

Even though Johns Hopkins explains that, “Scoliosis  usually doesn’t cause pain,” although some people opt to take physical therapy to help with back pain.

As Sasse wrote; “Honestly, my scoliosis isn’t that severe so it doesn’t affect me too much other than back pain after exercise or sitting for too long.  I did physical therapy to strengthen my core and back muscles which helps to lessen the pain.”

Another alternative suggested  by physical therapists was Yoga and Pilates for core strengthening.

Having Scoliosis and dealing with the pandemic at  the same time is difficult.  During the summer while being first diagnosed with Scoliosis, the first  Orthopedic surgeon suggested surgery due to the 47-degree curvature in the spine due to the fact it ranged very close to 50 degrees.  Questions like, “How am  I supposed to recover during this pandemic?” Or “How would I get all my work done in  time?” plagued many students alike.

After getting a second opinion, Johns Hopkins suggested after the second x-ray bracing because they measured 45 degrees as well as the spine shape and the three curvatures.  They also considered the degree of Scoliosis to be in the “grey area.”

What was personally worrisome was the judgement for going back to school while wearing the brace which is uncomfortable and uncomfortable looking.  Hearing other people explain what they went through or are going through gives me strength to write and talk about Scoliosis.