SGA Planned for Homecoming Even in a Virtual Setting 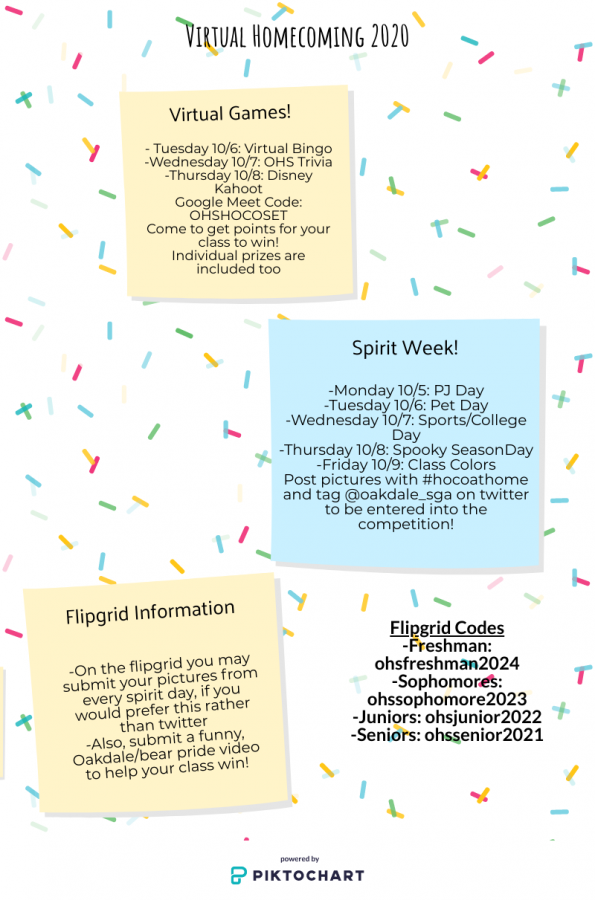 The flyer created for the Oakdale SGA that lays out all the plans to celebrate Homecoming Week.

Homecoming occurs every year, and is always a big hit. There are Homecoming proposals, dress shopping, spirit week, the pep rally, the football game, and so much more.  It is an event that is meaningful to many, and was one of many events cancelled due to COVID-19.

However, Oakdale’s SGA was not going to let a pandemic stop them from doing something in honor of Homecoming week.  The SGA decided to plan a virtual spirit week, and other activities in hopes of replacing some of the in-person events that would have occurred.  The only problem was, just like everything else occurring virtually, planning was no easy task.

“One of the biggest challenges was working around the guidelines set up by Frederick County regarding coronavirus.  We had planned to decorate the outside of the school or have a planned movie night at the fairgrounds, but we were unable to do so because of restrictions and not being able to have any events managed by SGA where kids would be meeting, ” explained SGA’s Vice President Quinn Scholtes.

With knowing they could not hold or advertise any kind of in-person events, they had to get creative. The SGA had decided that moving virtually would be their best option for celebrating Homecoming week.  However, planning the virtual events and advertising was going to be a struggle. They came up with some ideas, and eventually decided what they would do to attack celebrating Homecoming week virtually.

“There are 3 main things happening this week. Spirit Days all week where students post pics on twitter tagging @oakdale_sga or submit pics/videos to the flipgrid for each class. There is also a funny video competition among the classes. The video theme is bear pride. Anyone can submit a video on the flipgrid accounts then we will send them out for a vote. Lastly, there are games in SET on Tuesday, Wednesday, and Thursday this week using google meet code ohshocoset. They can win individual prizes as well as earn points for their class. All of these events earn points per class and the winning class gets money in their class club account,” explained SGA advisor Mrs. Jessica Miller.

The thought of doing something virtually rather than nothing was good for Axel Weingard, SGA’s President, and a senior at Oakdale High School.

“ I’m very excited that we’re doing something for homecoming. As you said before, a lot of people were really excited to participate in these sort of events throughout the year. I think it’s important that students should be engaged and socialize while at home. The events we have planned should be a lot of fun and I encourage everyone to come participate and have a great week,” mentioned Weingard.

Although the SGA had a great plan in place, and they were excited that they were hosting something rather than doing nothing, they still had to tackle spreading the word. This task was not an easy one, but one that could hopefully be accomplished.

“I think for us, it is just really encouraging staff and students to get the word out. It is hard for just the officers and Ms. Mulcahy and Mrs. Miller to spread the word alone. We are hoping that more students will post the fliers and tell their friends about the events,” mentioned Scholtes.

Knowing that everything has to be virtual now, there were questions as to whether or not an in-person event would, at some point, be possible.

“We are talking about possibly combining a homecoming week with Carnival and just really making carnival a much bigger more involved event once we are back…” Mrs.Miller commented. She is hoping something can be done in the spring, but with so many restrictions, there are  many unknowns.

Missing Homecoming has had an impact on many, especially freshmen as this would have been their first one, and seniors as this would’ve been their last. However, sometimes we have to look past all of this and understand that problems have an expiration date too. Eventually, COVID will be behind us, and we will, hopefully, get to celebrate our next Homecoming in person.