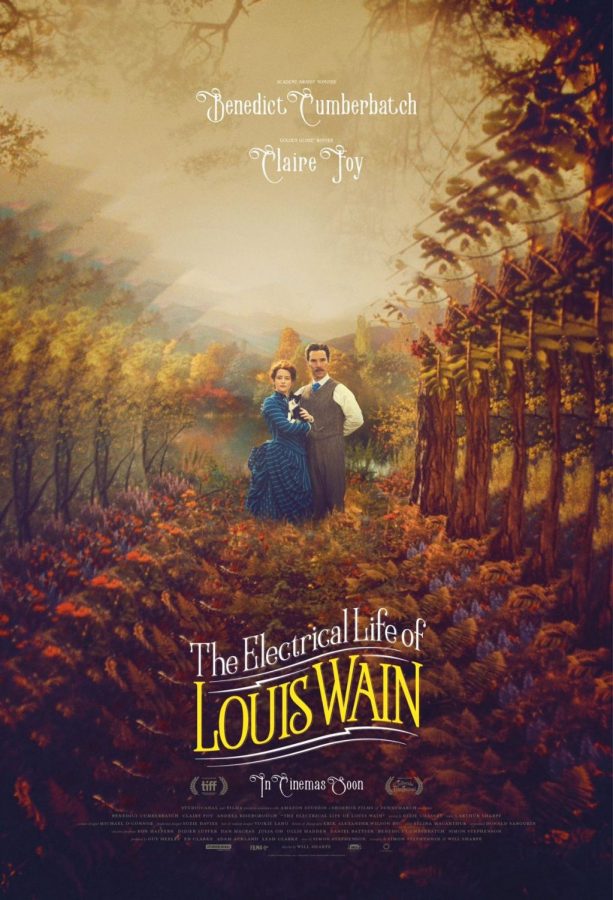 Louis Wain(Benedict Cumberbatch) and Emily Richardson(Claire Foy) in an abstract painting-like poster with their adopted cat.

The fascinating and truly incredible story of talented cat artist Louis Wain will be brought into the spotlight on October 22, 2021. Directors Will Sharpe and Simon Stephenson bring this story to life and show all sides of Wain’s creative, tragic, beautiful, and of course electric life.

The Electrical Life of Louis Wain follows the story of a talented inventor and illustrator (Benedict Cumberbatch) who lives with his mother and 5 sisters, following the death of his father. After discovering many odd jobs and being unhappy with all of them, he decides to take up a job offer from Sir William Ingram as a full time illustrator and artist. Wain discovers his extraordinary talent as an illustrator and decides to stick with it. During this time, Caroline, one of Wain’s sisters,  hires a governess, Emily Richardson (Claire Foy), and Wain instantly falls in love with her for her kindness and witty personality. After marrying Emily, Wain adopts a cat named Peter for Emily after she is diagnosed with breast cancer. Wain becomes inspired by Peter and the comfort he brings to Emily. He begins to illustrate cats, growing more and more famous by each creative, anthropomorphic illustration he creates.

The film does an excellent job at carefully crafting a way for viewers to understand Wain’s mind, and how he saw the world and every detail of the film is very surreal and truly illuminates Wain’s life.

“The movie depicts a very extraordinary and eccentric Louis Wain and it honestly portrays the artist very well and it fails to leave out details whatsoever”, artist Mike O’Grady states.

In addition to portraying the artist, the story does have a lot of history behind it, regarding the real artist. The film never fails to leave out detail but there is one element that was not really depicted in the film that may or may not have affected the PG-13 rating it got. Wain struggled with Schizophrenia later in his life, and it affected his illustrations, making them more psychedelic and a bit unsettling. Wain was later moved to a mental institution where he passed away peacefully at age 78 in 1939. He had such a great impact on so many and he went through so much. After his wife Emily sadly passed on, his mental health continued to decline, and his family’s support during this time vanished.

The movie stars Benedict Cumberbatch (Doctor Strange) and Claire Foy (The Crown)do a spectacular job of portraying their characters in the movie. Benedict Cumberbatch plays an eccentric, odd, quiet, and creative version of Louis Wain and it is believed that his portrayal of him is very realistic.

“Somebody who, in a very loud world, stayed true to who he was and it cost him a lot,” Cumberbatch states. “His work rate was phenomenal, despite his mental illness and despite the vagaries of the time, and not being able to adapt to the way he saw the world.”

In addition to Cumberbatch’s statement about his character, Sharpe adds on, “I think you don’t necessarily have to slay dragons or fly spaceships to be a hero. What drew me to Louis Wain was his humanity, more than anything else, and the challenges that he overcame, whether they were personal or to do with his mind, were huge”.

This movie is such a great example that the unexpected makes the biggest impact on the world and Louis Wain is a very underrated artist. This movie will be an experience never to forget.