The Rock School of Frederick 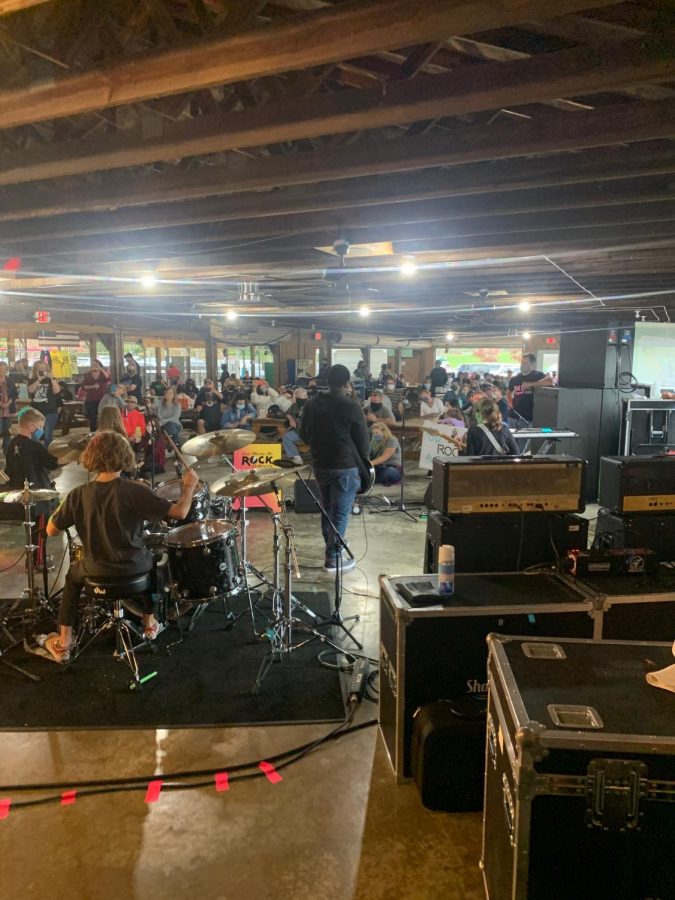 View of students from the Rock School of Frederick playing on Sunday October, 11.

On Sunday October 11th, from 11 AM to 10 PM, the Frederick School of Rock held a “Socially Distance Fest” in order to showcase the bands that were practicing at their school over the past few months. Scott Marceron, the owner, said that “Getting 60 plus bands off and on, and only running over 37 minutes at the end, I’d say it went pretty smooth. All the bands played great and the energy was off the charts!”

The set up of the show was five, two hour increments with around 13 bands per segment. “Having some kind of normalcy is very important to be able to do it under CDC Guidelines and Governor Hogan’s request was the key,” Marceron elaborated.

He said that the show had a big turnout. “We had to stay 250 and under [for an] outside event per Governor Hogan’s request. I would say we were at max 150 people per each two hour time block.”

When asked about how he managed to stay within COVID guidelines, he replied, “With the way our school community was I knew people would not have a problem adhering to this and wearing a mask.”

Due to  the pandemic, many places have been canceling their shows because of the difficulty that comes with the planning  while underneath CDC requirements. When asked about his motivation to put on a show despite the difficulty, Marceron replied, “I saw the need for our students. Mental Health is a real issue right now…I feel like every student is one of my kids. I would make this happen for my kids and the Rock School kids are like family to Kela and I. It was such an epic day.” Kela is his wife, she helps to run the School as well.

The different types of shows that the Rock School of Frederick has put on over quarantine has progressed throughout the months. “We started out with those amazing Virtual online shows with amazing production to a few smaller outdoor open air shows leading to our ‘Socially Distance Festival.’ A nice slow gradual build I say,” Marceron explained.

Saturdays show was a success both in turn out and in conforming to COVID guidelines. The also put on a show on October 17th from 4-7 PM. It was an acoustic showcase for individual students.

The Rock School of Frederick will continue to put on shows throughout the rest of quarantine and allow the students to rehearse and attend lessons so long as doing so will protect the students,their families.