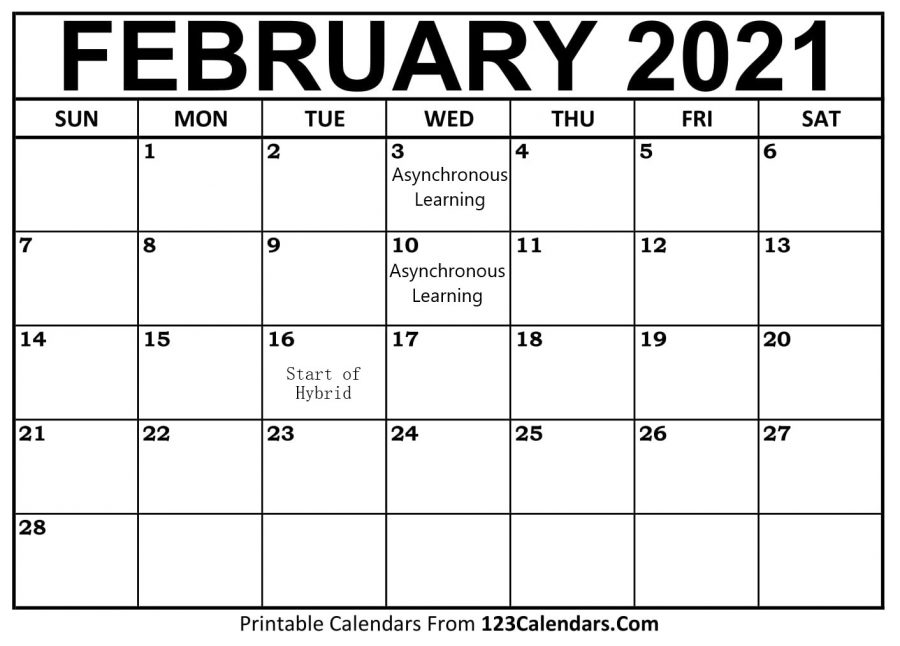 A calendar marks the 2 asynchronous sessions leading up to the start of hybrid, and the first day of hybrid is Tuesday, February 16.

This decision impacted many students and teachers.  “There were students that came into the school for small groups and tutoring due to wifi issues, or additional teacher support. I had 4 students who needed the additional help in my classes so I met with them between 1-2 times per week,” described Brian Ranallo, a Career and Tech Education teacher, one of several teachers holding a small group.

However, once they were cancelled, the new question became what would happen to hybrid?  Teachers were originally scheduled to come in on January 13, with their students coming back on January 28.

Not long after FCPS cancelled the small groups, they announced the new start date for hybrid. Teachers would report to the buildings on January 27, and students would come back February 16. For the students staying virtual, everything would remain the same.

With teachers having to prepare to teach in person, some of them are having mixed emotions. Some teachers are feeling ready to go back and have a sense of normalcy, while other teachers are still a little hesitant and unsure.

Jennifer Morgenthaler, a Biology teacher, has had many emotions about returning to hybrid.  She was a little uncertain at first, but believes once she is vaccinated and wearing the PPE, she will feel a little less nervous. “My thoughts and feelings on hybrid had, for lack of a better word, evolved since it was first proposed last summer. I am still concerned about students adhering to the mask policy.”

Mrs. Morgenthaler continued, “When Governor Hogan moved educators to 1B for vaccines, I actually cried. It was the first time in a long time that I felt hope..”

Teachers have a vital role in returning to hybrid, but so do students.  Many students have been wanting to go back into a school building and have a sense of normalcy again.  However, many of them won’t be able to due to health concerns, or just not feeling comfortable.

Christian Bass, a freshman, said he will not be returning hybrid: “I will most likely stay virtual because my dad is high risk and I am not able to do most things right now, and that will probably be the same for hybrid.”

In addition to the physical health risks posed to students and teachers with the beginning of hybrid, what about mental health? This question had many mixed answers.  Some teachers felt it would add more stress, while others felt it would be a fresh start.

Mrs.Morgenthaler believes her mental state will experience the best of both worlds. “There is a lot of anxiety for me. Some of it is the fear of the unknown and hopefully that will subside. There will be a lot of work involved as once again teachers have to reinvent or tweak how we teach. I am confident I will get the hang of it though.”

With moving to a new form of learning, a new schedule follows suit.  Beginning January 28, the school day will begin at 7:30 am, rather than 8:30, and each block will be 55 minutes instead of 80.  The start time of the new schedule has many people concerned they won’t be able to wake up on time. But aside from that, most students are ok with it.

“I feel good about it if we are in school, and I like that we have all classes every day. I do not like waking up that early, but the schedule is fine.” described Bass.

One of the greatest unknowns right now is the impact hybrid will have on the community and the COVID numbers.  Many believe there will be an increase, while others believe that as long as we follow proper procedures, things will be ok.

Molly Thompson, a freshman at OHS, believes hybrid could be good for the community, but not so good for the numbers: “I think it will be beneficial to most students” but concedes that an “outbreak [could put] us back in virtual.”

Thompson is not the only one that has come to this conclusion.  In fact, many parents and students are in the same boat right now.  Parents want the students back in school but some are beginning to realize that whether or not the numbers go up, is dependent on the following of protocols.

At the end of the day, when hybrid begins, it is truly a matter of everyone taking things seriously.  The start of the hybrid was delayed by FCPS , so that it could begin with a smooth and safe transition.  However, as students and teachers at FCPS, it is our responsibility to make sure we take this very seriously and follow the protocols to make sure everyone remains safe and healthy.