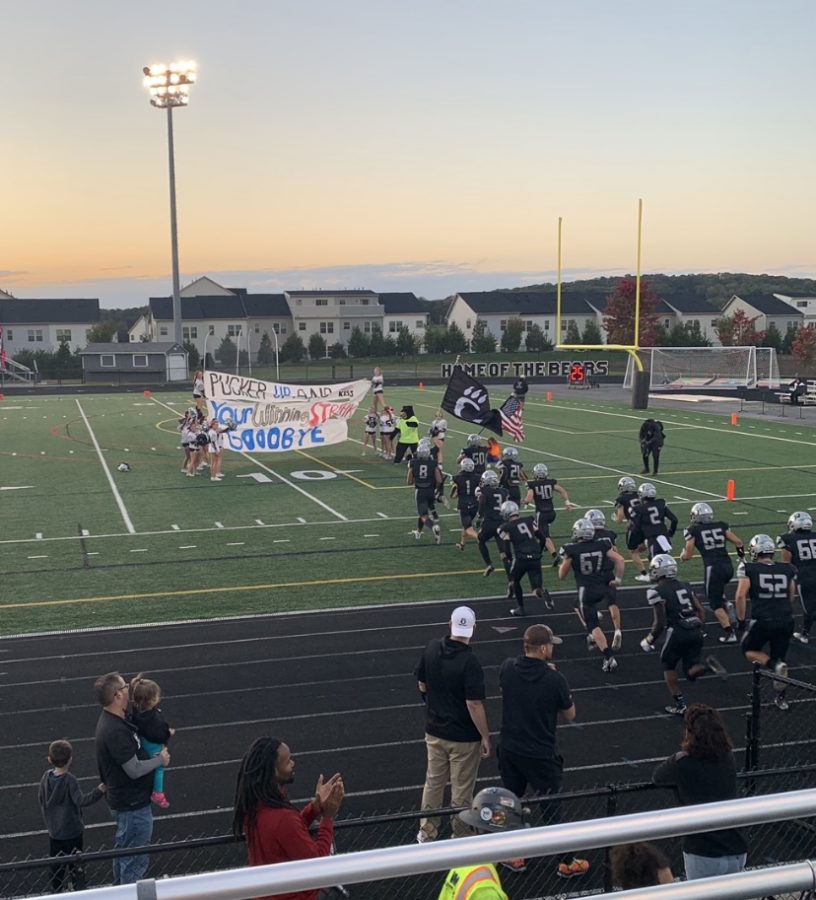 Bears running onto the field, ready to win their Homecoming game.

After a fun week of dressing up for spirit days and buying tickets for the Homecoming dance, Oakdale High School students were also getting excited for their Homecoming football game on Friday night. The Homecoming game is always a huge part of the week. This year’s game was a huge success. The student section was loud, everyone participated in the theme (which was neon out), and the game was very entertaining to watch. The Bears played at home against the undefeated Urbana Hawks, which they won 28-26.

Crummitt adds, “It was a good turning point for us in the game to help us win and we got locked in on defense. They made a couple good stops and got in the endzone so it helped a lot”.

When talking with  Senior Rory Blanchard about how the team tried to prepare for this game against Urbana, he stated, “We have been trying really hard to get everyone to lock in and get serious about this game for the last week”.

Crummitt added on to Blanchard’s ideas, voicing, “We had a good week of practices, we’ve been working hard on our offense and defensive plays”.

After not only winning their Homecoming Game, but beating a formerly undefeated team, the players were obviously very excited and wanted to celebrate. “It was definitely very hype and we were all very happy because it was a huge in-county game for us”, mentioned Crummitt.

Crummitt adds, “They were 6-0 so it was a good win for us and will help us prepare for Friday this week”.

Football coach, Kurt Stein had a lot to say about Friday’s game, his thoughts, and how he thinks his players did. When talking about how the team’s performance was as a whole, Stein noted, “Very well, they executed well and made the big plays at the end when they needed to”.

Stein shares his thoughts on how the team was playing at halftime. “We felt like we had to make a few adjustments and corrections to some things but we got in the room, got on the whiteboard and did that”. “The guys took the coaching well and worked really hard on what we talked about in the second half.”

Since playoffs are right around the corner, the Bears are definitely focusing and working hard on that. Stein talked about how he feels about playoffs so far: “Playoffs start in two weeks and hopefully they will be ready when we get going”.

Stein also says “I believe in them a lot that they can go very far”. Overall, this Homecoming game was one to remember for both the players and the fans!”