Rohingya refugee crisis, what is it, and why? 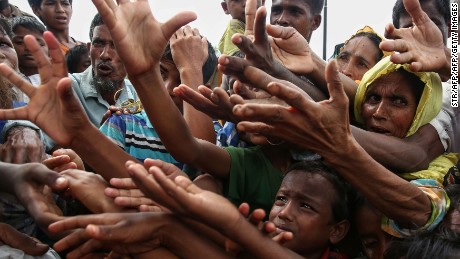 Over the past month, the Rohingya, a mostly Muslim minority from the Rakhine state of Myanmar, have fled into neighboring Bangladesh at the hands of the Myanmar military. The Rohingya are a stateless ethnic group whose roots can be traced in Myanmar as early as the ninth century. The Myanmar government has contested that the Rohingya are illegal immigrants from Bangladesh and refuse to grant them citizenship. Most Myanmar government officials deny Rohingya existence and instead call them “Bengalis.”

Myanmar, a majority Buddhist country, has long struggled with human rights abuses. Operating under military dictatorship from 1962 until 2010, military leaders imprisoned and abused minority and opposition groups during their rule. Although a democracy has been implemented, and the military only controls one fourth of parliament, the new government still has little to no control over military operations.

In late August, the Myanmar military conducted raids and attacks on Rohingya villages as backlash against a small group of Rohingya militants who attacked 30 police posts. Over 400,000 Rohingya have fled their home villages in search for safe refuge. Fleeing Rohingya have told tales of their homes being burned, women being raped, and relatives being taken away, never to be seen again.

This is not the first time the Myanmar military has shown violence against the Rohingya; in the 1990’s, over 100,000 Rohingya fled to Bangladesh to escape the military. It is estimated that Myanmar was home to between 1.1 and 1.3 million Rohingya when Myanmar gained its independence in 1948. It is  now estimated that 500,000 Rohingya live in Myanmar, while 900,000 live in Bangladesh.

Bangladesh does not have the funds or resources to house 400,000 refugees, with a GDP per capita of just $1,358. In comparison, the U.S.’ GDP per capita is $57,466. Many of the new arrivals fleeing Myanmar are living in very poor conditions in overcrowded, waterlogged camps. The Bangladeshi government is pressuring Myanmar to take their people back, but with not much diplomatic leverage, Myanmar is in no rush. Other countries’ leaders have also put some pressure on Myanmar to welcome the Rohingya back.

US Secretary of State Rex Tillerson in a statement to a UN conference condemned the Myanmar military saying, “This violence must stop, this persecution must stop. It has been characterized by many as ethnic cleansing. That must stop.”

Rachel Rickert, an intern at the International Rescue Committee for Refugee Resettlement, believes it may be a long time until the Rohingya who fled will return and be welcomed back in Myanmar: “You have to understand the tensions in Rakhine before the mass exodus. The Rakhine buddhists were always at ends with the Rohingya Muslims. The Buddhists believed the Rohingya were illegally occupying their land. The attacks on the police by the Rohingya militants were only the most recent tipping point.”

Facing pressure from allies and most Western nations, Myanmar is planning on starting the process of accepting “verified” Rohingya back into the country. But still, there’s no telling how long this watered-down process may take. It is unknown how many Rohingya, who are not regarded as citizens in Myanmar, will be accepted back in the country. The UN also believes most Rohingya won’t be returning home soon.