Agree to Disagree: A Lost Art 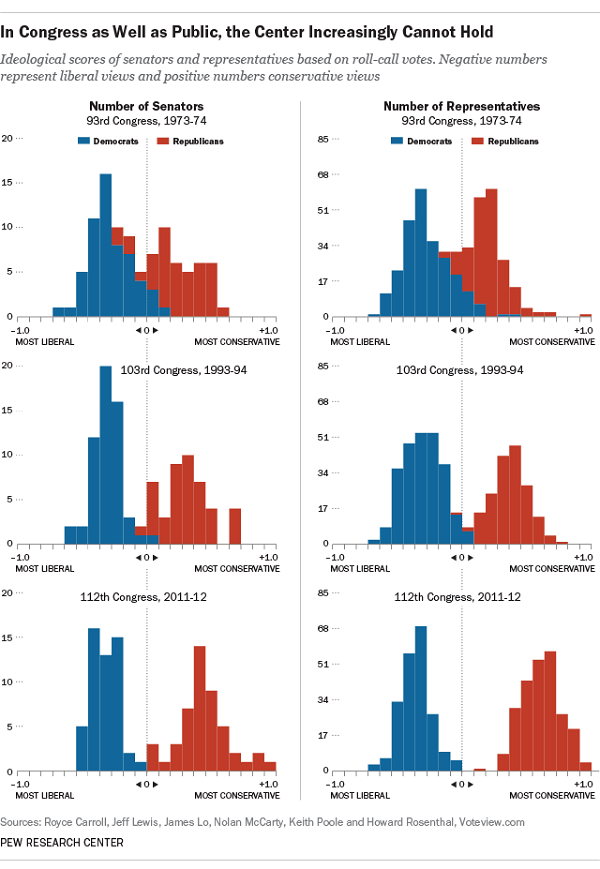 Picture this: You’re at your family’s annual Fourth of July party, and everything is going well. The sun is shining, the food is delicious, and everyone is engaging in pleasantries. But alas, Uncle Joe gives his two cents about the refugee crisis and the party dissolves into chaos before you can say “extreme vetting”.

With political polarization at an all time high, Americans and their respective political parties have found themselves at odds with their antipodals. Peaceful discussion of political views amongst opposing parties seems almost impossible without tossing in an ad hominem.

Oakdale Senior Chase Lemley shares, “The way the political parties are moving, people only want to hear their own viewpoints. This acts as an echo chamber that reinforces their predispositions.”

But has it always been this way?

The most widely respected measure of ideology in Congress is the DW – Nominate system, developed by political scientists Keith Poole and Howard Rosenthal. The system can be used to array every member of Congress on an ideological scale, dating back to the First Congress.

When reflecting on the data from the 93rd Congress (1974) leading up to the 112th congress (2012), a physical political polarization can clearly be seen on the two-dimensional graph. Within the graph, a horizontal bar represents the liberal-left and conservative-right spectrum, and colored bars corresponding to their political parties fall along the line based on the potency of one’s beliefs.

The 93rd Congress has overlapping lines of blue (Democrats) and red (Republicans) with a clear sign of moderate views within as opposed to the 112th Congress, where the bars have ceased to touch all together.

Because of this, Congress has earned a reputation of unproductivity, with its members unable to find a compromise that would appease the opposite side.

Drew Desilver, a senior writer at the Pew Research Center claims, “Political scientists debate whether polarization in Congress preceded or followed polarization among the wider public…One thing is clear, though: When a polarized Congress represents a polarized public, not much gets done legislatively.”

So, unless the principle of agreeing to disagree is utilized once again, Americans will continue passage on the path of political polarization, and Uncle Joe’s political ponderings will continue to ruin family functions year round.