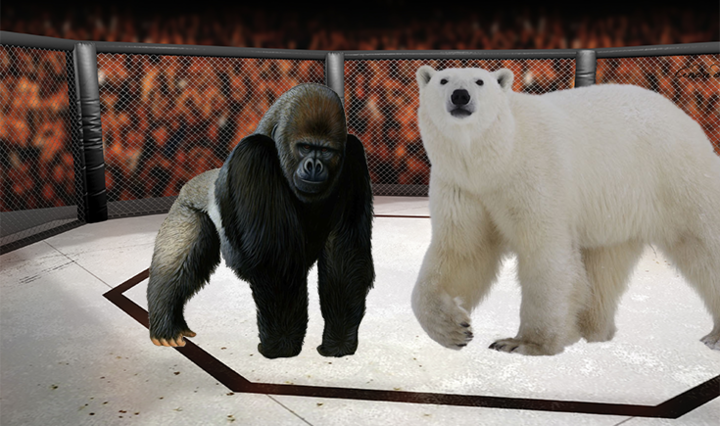 Throughout history, mankind has posed many questions with few answers. An important question to ask today, of all day’s – National Animal Day – is: in a fight with a gorilla and a bear, who would be crowned the victor?

In order to make this battle as fair as possible, I will only consider the larger species of both animals. We will be pitting the eastern lowland gorilla against the polar bear.

First, the advantages and disadvantages of both animals, beginning with the eastern lowland gorilla, are considered. Males of this subspecies stand at around 5 feet 6 inches tall, weigh around 374 pounds,  and can reach speeds of around 20 to 25 miles per hour. Gorilla’s, like many primates, have extremely dense muscles. This allows them to lift weights six times heavier than what a human could lift. These dense muscles give strength as well as protection to their internal organs and bones. The gorilla’s defining advantage comes in their opposable thumbs, allowing them to use tools and pick up objects with ease. The gorilla is able to use tools to their advantage, as well as being able to grapple onto their enemy in a fight.

The gorilla is not without its disadvantages. For example their dense muscle structure renders them unable to swim, a clear disadvantage when going against a polar bear.

Polar bears are the largest of all bear species, standing at more than 10 feet tall and weighing anywhere from 800 to 1200 pounds. These bears have dense coats of fur and fat to keep themselves insulated from the cold temperatures of the arctic. Polar bears are the most carnivorous of all the bear species and are able to swim for long periods of time in frigid waters.

This bear’s greatest weakness against a gorilla is the lack of an opposable thumb.

Now to the actual fight: If an eastern lowland gorilla and a polar bear were to fight in a neutral location, giving neither an advantage, the polar bear would win!

There are a few reasons for their defeat against the bear. The polar bear has a large height and weight advantage, giving it strength as well as a large and dense hide to protect it from any blows. The polar bear, due to its carnivorous behavior, already has a killer instinct and has likely fought and killed multiple creatures before, and has possibly fought other large polar bears.

The gorillas thumbs would give it the use of tools, yet most primates that use tools have only been able to use simple tools such as sticks to reach into deep crevices.

The gorilla is at a disadvantage in this one on one situation, as gorillas normally live in large troops of other gorillas, giving them back-up if necessary in a fight. Polar bears are mostly independent throughout their lives and are used to fighting by themselves against one or a group of other creatures.

The polar bear comes out as the clear victor due to its fighting knowledge and clear size advantage over the gorilla.