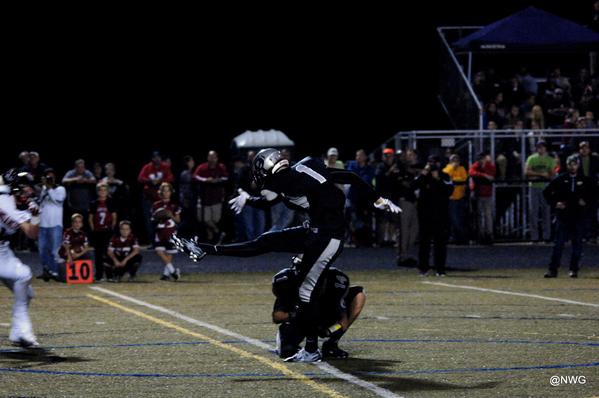 As the homecoming game came to a start, the pressure was on. Who would still remain undefeated? The stadium was packed an hour before the game. You couldn’t even see the home student section they had so much camo. Oakdale’s fans had their white rally towels swinging and the game atmosphere was like no other. This game was a classic match of ground and pound against the west coast passing attack.

As the game started, both teams’ defensive lines showed how strong they were, leaving the game tied at 0 heading into the third drive. Head football coach, Kurt Stein, drew up a trick play with five minutes left in the first to run a double reverse pass. Junior Wide Receiver Cory Schlee connected with Senior Wide Receiver Ben Simonica on a beautiful pass and OHS took the lead with a score of 7-0. Linganore showed their dominance on the ground and rushed for a touchdown to even up the score.

As Oakdale returned the kickoff, the ball was fumbled and picked up by Oakdale for a touchdown. The play was called back after the referee’s discussion — he was down before the ball came out. The very next play Senior Quarterback Sean McGaughey connected with Schlee for a 35 yard touchdown pass. The point-after-attempt was missed, score stood at 13-7. Linganore Senior Quarterback Nathaniel Musselman had some struggles early on as he was pressured by Oakdale’s Junior Defensive End Percy Agyei-Obese. Oakdale obtained possession with two minutes left and drove the ball to the Linganore side. With 5 seconds left, Senior Running Back Malik Boyd fumbled the ball with Linganore to recover. At halftime, the score stood at 13-7.

Throughout the third quarter, Oakdale held a sustainable lead of 20-7, with a strong play of Oakdale’s defense. Oakdale got the ball back at around midfield, and drove to the red zone to commit a turnover. As the fourth quarter started, Linganore obtained a fumble recovery and drove down the field to score a touchdown. The score changed to 20-13. Linganore’s defense came up big as they forced Oakdale to punt with three minutes left in the game. Linganore led another drive to the Oakdale red zone and scored off a running touchdown. The score was brought up to 20-19.

Linganore had the decision to tie or win the game, so they tried a two point conversion. Head football coach, Rick Conner, drew up an intricate play where Linganore ran a boot leg, meaning Senior Wide Receiver Wade Sterien would catch the ball in the end zone. With 28 seconds left in the game, Linganore took the lead with a score of 21-20.

On the pursuing kickoff, Ben Simonica returned the ball back to the Linganore 45, but the clock never started so the referees took off 10 seconds to make the game clock go to 15 seconds. Oakdale ran a quick pass play to get the ball to the 30 yard line so that Senior Noah Brummer could attempt a 49 yard field goal. The kick was right on target, but not strong enough. Given that most NFL kickers are not able to hit a 49 yard field goal in this day and age, seeing Brummer kick the ball so close was spectacular. As the kick was missed, Linganore won the homecoming game, 21-20. Even though OHS lost, making their overall record 6-1, both teams played amazingly and have a shot at playing each other again in the play-offs.