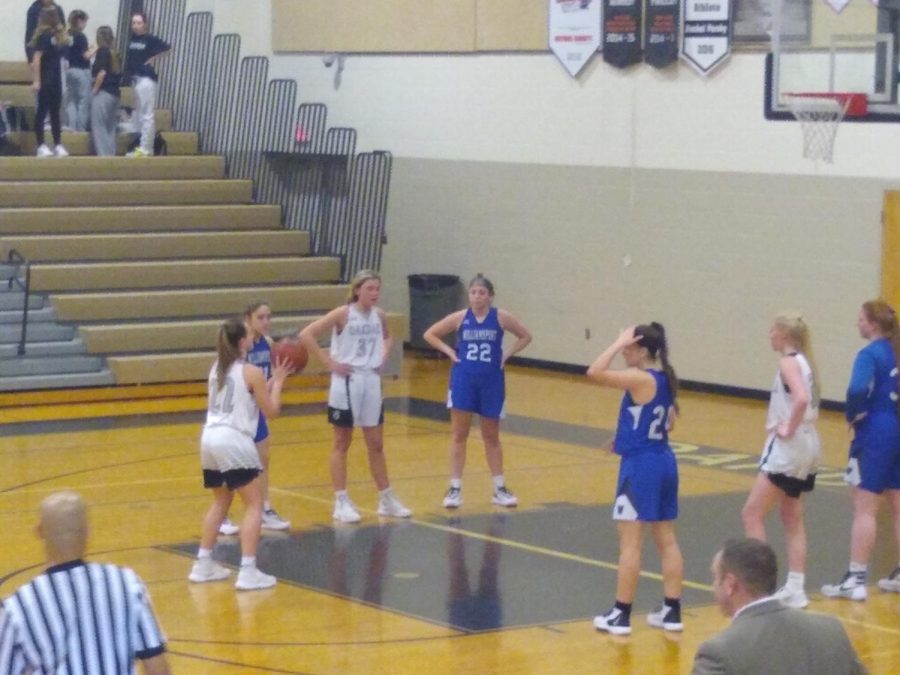 Point guard Nikki Etchison takes two free throws in the fourth quarter to save the game.

The Oakdale Varsity Girls Basketball team has been fairly successful this year. It is common that the team has a slow first half yet they roar back in the second, delivering in the clutch, usually with three-pointers. On Friday, January 10, 2020, they did it again, beating Williamsport 46-40 in an enthralling win.

In the first quarter, Oakdale looked more like a middle school team, missing almost all of their attempted shots. Meanwhile, Williamsport took full advantage of this situation and quickly jumped out to a double-digit lead.

In the second quarter, Oakdale looked slightly less sluggish but still could not awake from their slumber. Williamsport. Fortunately, Williamsport had also cooled down, so Oakdale was able to stay in the game.

At the beginning of the third quarter, Williamsport quickly scored two buckets in the paint through the use of their 6’1 center, Chloe Bittner. Bittner backed down her defenders in the post as Oakdale did not have a player strong enough to guard her. However, Oakdale was determined. Their 3-pointer barrage started with 5’5 guard Nikki Etchison hitting a long bomb from the corner and another one from the top of the key. Finally, 5’9 power forward Gabby Averill, who had been hesitant from the 3-point line all night, hit a three of her own. In addition to their third-quarter success, Oakdale also started thriving in the paint, with Averill using her height to her advantage against smaller defenders.

In the fourth and final quarter, Oakdale continued to shine, this time dominating on the defensive end. Williamsport managed to get a few buckets; however, and made it a 1 point with one minute left. The score was 40-41. Nikki Etchison was fouled with 55 seconds left in the game. She made both free throws to make the score 43-40 . Next, forward Grace Carey posted up on Chloe Bittner, got fouled, and made 1 of 2 free throws to make the score 46-40 with 11 seconds left. Williamsport could not score in these few seconds and Oakdale walked away with the hard-fought win. When Etchison was asked about the win, she commented, “It was  hard for us especially because we had two starters down, and we just had to find a way to work together.” Etchison’s teammate Averill added, “At first we were rough…but once our energy started getting up, especially with the crowd chanting, we got into a rhythm.”

Moving forward, the Girls Basketball Varsity team realizes that they played well, but they do still have many things to improve upon such as defense and scoring in the first half. ”We need to play harder and with a faster pace, especially in the first half,” noted Etchison. That way, they can manage a comfortable lead on the opposing team and win the game without stress.