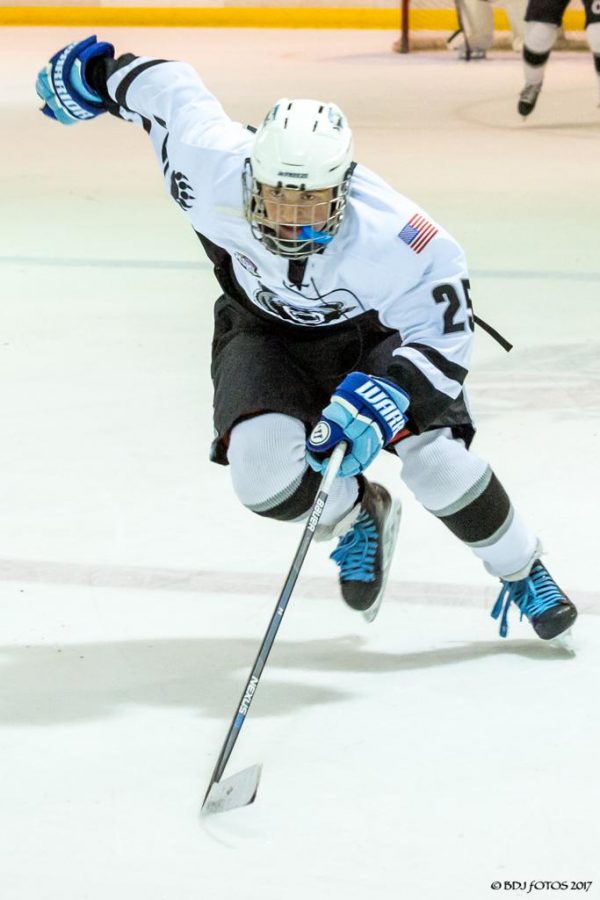 Senior Brendan Ricucci hustles down the ice to get the puck.

Two seasons ago a talented Oakdale Ice Hockey team made it all the way to the state championship dominating every team in their path to get there. Last year was a different story as Oakdale struggled immensely, going from a top of the division team to second to last in the division.

Why did Oakdale struggle so much last year? The answer to this question is inexperience. With many talented seniors graduating after the championship run, it was up to many younger players to fill their shoes.

The team had many new faces last year but age and size played a huge factor throughout the season. This year, as the team matures they look to scratch and claw their way back to where the team once was.

Senior Goalie Brock Layden shared his input on the season: “I believe we are going to be a different team from last year. I’ve seen many kids mature from last year and I feel like they will know what their doing when the puck is on their stick now. As long as we stay healthy, I see a major improvement from last year.”

A clean start from a new coach hopefully will help spark the team as the father of MSHL Hall of Famer and former Oakdale player Jason McElroy, Hugh McElroy will step in as the varsity head coach.

Another very important factor the team had two seasons ago but unfortunately was lacking last season was the fan support. Two years ago for the key games, Oakdale students were doing a great job filling up the seats at Skate Frederick, as for last year students still came out but not in the numbers that they came out in the previous season. Fan support is heavily important in motivating a team and hopefully will improve this year. All games up until playoffs are free.

Junior Jacob Stokes explained how he has very high standards for his team this year: “Winning States is always the goal.”

The bar this year, just like every season, will be set high for the Bears. After a let down season last year, the Bears will be doing whatever it takes to get back to their winning form. The team has what it takes with a solid new coaching staff, including a goalie coach, and a heavily matured roster. Watch out for the Bears this season!