The NFL Returns to Play Amidst the Pandemic 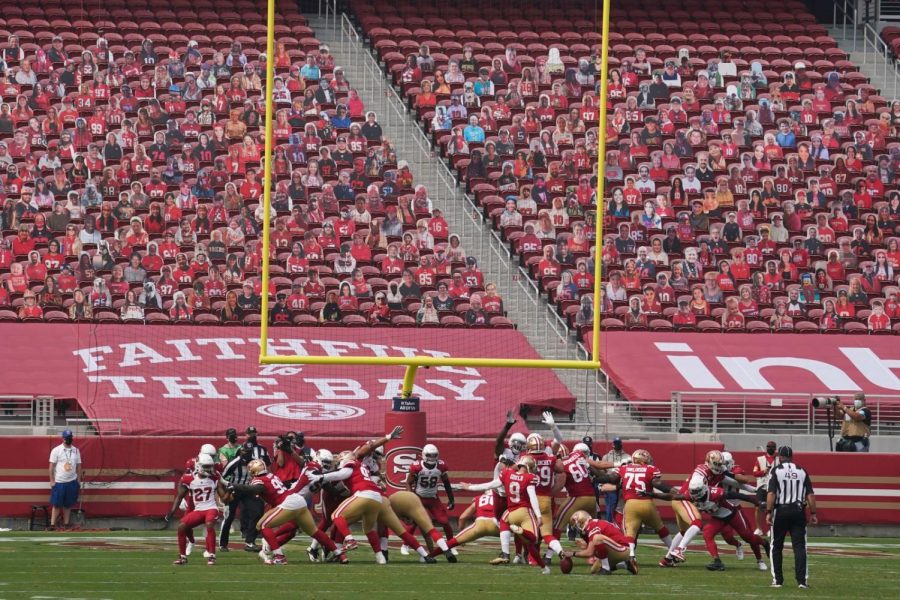 The San Francisco 49ers and Arizona Cardinals faceoff with cardboard fans in the stands.

About a month ago, all thirty-two National Football League teams returned to play. While normally Americans would be cheering for the start of the season, in these abnormal times, the NFL’s return can be questioned. People’s lives around the world have been altered because of the Coronavirus pandemic; quarantine, masks, and gloves are the new normal; therefore, the NFL had some adapting to do.

Garrett Witt, Oakdale High School senior and football player, agrees with the NFL’s return because, “They are able to test everyone everyday and when someone has tested positive they are postponing games. With so much money they can keep almost all of them safe.”

Because of the Coronavirus, many precautions had to be taken by the NFL in order for their hopeful return to become reality. Various precautions include: social distancing; disinfecting of equipment and facilities; masks must be worn unless they interfere with physical activity; each club must hold an education seminar for players, staff, and family members; active Coronavirus testing, etc.

When questioned about the precautions the league is taking, Oakdale High School’s varsity football coach, Kurt Stein, agrees with the protocols taken by the NFL: “They have some of the most thorough testing in the world.”

He then added, “their contact tracing is second to none.”

In addition to these many precautions, a noteworthy change includes the cancellation of the preseason games. The NFL and National Football League Players Association (NFLPA), a union representing players in the NFL, decided that the preseason games raised worries for players health and safety, plus the regular season games are in jeopardy of not finishing on time; therefore, they canceled all preseason games.

Another notable precaution is the majority of teams have not allowed the attendance of fans. At the beginning of the season, 26 out of the 32 teams did not allow any fans. However, in more recent weeks, some teams are introducing reduced capacity seating.

When it comes to watching a game on the television or in the stands, Witt explained why he personally would not attend a NFL football game if he was allowed: “I think keeping people spread out there is great but I don’t see the need to go and put myself and others at risk. If people want to, that’s up to them, but I probably would not.”

Even with the NFL implementing these new protocols, some teams have fallen victim to positive Coronavirus tests. In response to these positive test results, the following games have been postponed or rescheduled (only updated as of week five): Steelers vs. Titans, Titans vs. Bills, and the Patriots vs. Broncos. Because of these games being postponed, the NFL was forced to reschedule eight other regular season games.

While the Coronavirus has altered many aspects of everyday life, the virus stands no chance between the American people and their football. American football remains the most popular sport in the United States. The NFL games can be viewed on Monday night, Thursday night, and throughout the day Sunday.