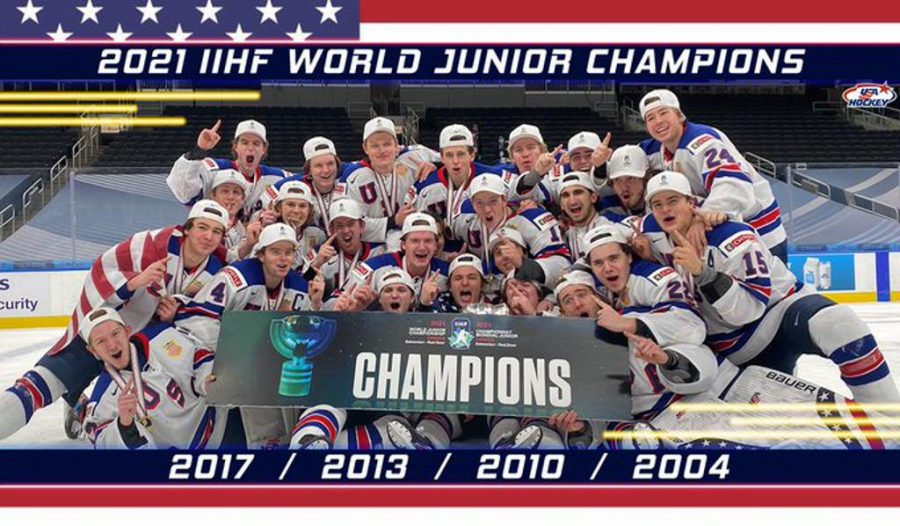 Team USA poses for a picture with their gold medals and world junior championship trophy.

The World Junior Championships is a yearly tournament lasting about 10 days, teams playing up to 7 games in these 10 days. The tournament consists of the best players under 20 in the world, the top NHL prospects. Some of the players in this tournament have already been drafted while others are aiming to make it to that next level.

Team USA had an interesting route to the final. They opened group play with a 5-3 loss to Russia setting them back. They bounced back the next game with a 11-0 statement win against Austria. Team USA would continue to be a dominant force in the tournament winning the rest of their games.

Senior Jacob Stokes explained, “It was really cool to see how they started the tournament and then too see how it ended.”

Some were saying that Team Canada hadn’t had any real competition until the championship game when they played Team USA. They scored over 30 goals in their first 4 games but couldn’t get around Team USA’s defense lead by the 14th overall pick in the 2019 draft Cam York.

This tournament happens yearly usually during the NHL season. This year the tournament served as an opening act for the NHL. Because of the pandemic the NHL pushed back the start of their season. This led to more people tuning in and watching this tournament.

Senior Tyler Antanellis stated, “The tournament is always fun to watch, but especially this year where there wasn’t any other Hockey on.”

This was team USA’s 5th world juniors Championship in 44 years that the tournament has been around. Next year’s team is going to look very different from this year’s team however, team USA always has a dominant roster. This year’s team faced some adversity but ended up bringing home the gold.